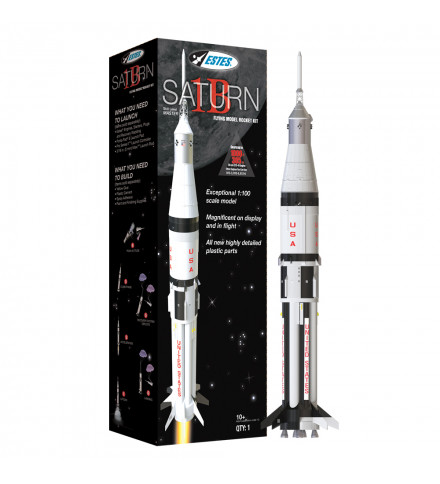 This Estes Saturn 1B is a stunning 1:100 replica of the famous rocket of the Apollo era. Rich of parts to be assembled, this kit is a real fun to build and fly, and can be also a wonderful static model.

The first tests for the Apollo project were carried on using the the Saturn 1B. Both unmanned and manned versions of the Command and Service Module, and the LM were test flown on the Saturn 1B while the Saturn V was still in development. Even the S-IVB upper stage which would be later used as as the third stage of the Saturn V, was first tested on the Saturn 1B as its second stage. All the Earth orbit missions of the Apollo spacecraft were launched aboard a Saturn 1B.
The Saturn 1B is easily recognized by its set of eight cylindrical tanks, black and white alternated, that forms the bulk of the rocket first stage, the peculiar fairing among them and the eight swept-back fins. The eight tanks have been misidentified as Redstone missile stages for a long time, while they were only made with the same forms used to make the Redstones.
In February of 1966, the first Saturn 1B was launched with an unmanned version of the Apollo Command and Service Modules and the subsequent launch on October 1967 carried the Apollo 7 in orbit. After 1973, the Saturn 1B was then used to carry crews aboard the Skylab Orbital Workshop .

The Estes Saturn 1B SA-206 is a stunning 1:100 scale recreation of the Saturn 1B and Apollo spacecraft stack as it appeared in 1973 for the launch of the first Skylab crew. Every detail is there, from the Launch Escape System atop the Apollo Command and Service Module, to the first-stage H-1 engine nozzles (remove for launch). Textured body wraps, injection molded components, and other plastic formed parts add a level of realism to this Master-Level kit that every scale modeler will appreciate.

You can use the Estes D12 engines, which are cheap and easy to ignite, but if you want a higher flight you can also use some Aerotech engines that we suggest in the list of recommended motors. We also suggest replacing the plastic parachutes with stronger nylon parachute like Top Flight PAR-24 and PAR-18 Thin.

If you want to use this rocket with Aerotech motors, you will need a launch pad with a 6 mm launch rod like the Estes Pro Pad, the Estes "E" Launche Pad or the Klima Launch Pad, and a 12-volt launch controller as the Estes PS II Launch Controller or the Aerotech Interlock Controller.

What you need to fly it (not included):
•    Launch pad with 6 mm rod
•    Launch controller (if using Aerotech engines it must be 12 volts)
•    Engines (see list of recommended engines)
•    Flameproof wadding or parachute protection sheets