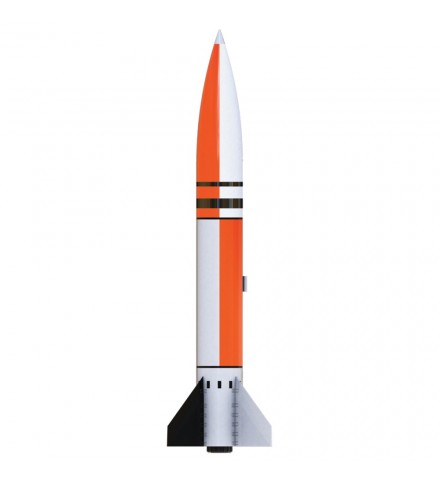 Pro Series II ™ Series Kit
Almost 70cm tall and powered by D, E and F engines, this 1:12 scale model is a fantastic replica of the sounding rocket made for the Hardtack Nuclear Test Series project.

During the mid-1950s, public concerns about nuclear fallout from US and Russian tests were reaching their peak. For this reason, on August 22, 1958, President Eisenhower announced that the United States would ban further nuclear tests by October 31 of that year. US scientists, eager to collect as much data as possible, responded with the Hardtack test series. Scientists were interested in many scientific areas, but the main interest lay in the effects of radioactivity from underwater and above ground detonation.

The Hardtack Nuclear Testing Program consisted of 35 detonations in the Pacific Proving Grounds during the period April-August 1958. Scientists at the time were primarily concerned about the damage to the ozone layer and the possible effects of long-range fallout and established scientific measurements of the earth's upper atmosphere (aeronomy) would help clarify the possible damage that would occur.

The one- and two-stage Doorknob rockets were developed using Lacrosse and Thiokol solid propellant engines and could carry instrumentation to approximately 80 km altitude to acquire radioactive data for analysis. Early results of these upper atmosphere data suggested that little or no ozone layer damage was measured during nuclear tests, and detonations underwater likely produced enough ozone to replace what little that might have been lost to cause of surface tests.

The Estes 1:12 scale model of the Doorknob is large and impressive. Simple to build and fun to fly, this kit will make a big hit in both the sports and scale rocket category. The kit has two sets of decals available for those who want to turn this scale model into a sports model.

WHAT YOU NEED TO LAUNCH IT (sold separately):

With motors up to class D: