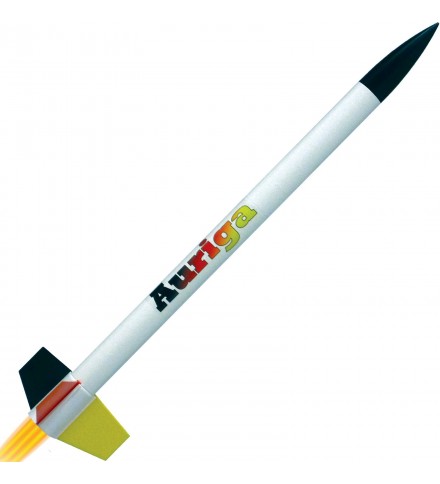 The Auriga is a large model rocket (50 mm diameter) using a cluster of three motors and very quick to be built. It will take you about half an hour to have it ready for your first launch!

The Auriga has three motors ignited at the same time, thus giving three times the thrust. This will launch your rocket to very high altitudes but you can choose the motor configuration you want to get different altitudes. For a safe and reliable ignition all the times you will have to use Stage Igniters and Tapematch, with only one igniter. No need of powerful launch controller with huge batteries, a standard 6 volt launch controller is all what you will need.

The fuselage is made with three high quality kraft cardboard tubes, with white surface, and the fins and their fincan are made of plastic. The fins slides into the fincan slots which guarantees a precise alignment with no effort.

The Auriga needs a very short time to be ready for a new fligth because of its ejection gas cooling and filtering system (deflector or "baffle") that protects the parachute without the need to use flameproof wadding or sheets. After each flight you have just to fold the parachute, install it into the rocket again, replace the motors and you are ready to go!

The assembling of this model rocket is extremely quick as well, thanks to its plastic fincan. Fins can be glued with a bit of glue, but it is often not necessary because the slots are so precise to hold the fins in its place by friction only. The kit is completed by a large self-adhesive decals sheet for decoration.

Recovery is guaranteed by the included 55 cm nylon parachute.